A young mother in Australia is fighting to recover from a virulent staph infectionthat threatened her life and left her partially paralyzed. She caught it from a seemingly innocuous source: borrowing a friend's makeup brush.

The Daily Mail Australia reports Jo Gilchrist started feeling pain in her back on Valentine's Day and it rapidly got worse -- "worse than childbirth," she said. She lost all feeling in her legs and lower body and had to be airlifted to a hospital in Brisbane for emergency surgery.

It turned out to be an infection caused by a drug-resistant strain of staph calledMRSA (Methicillin-resistant Staphylococcus aureus) that she apparently contracted when she used a friend's makeup brush to hide a pimple. 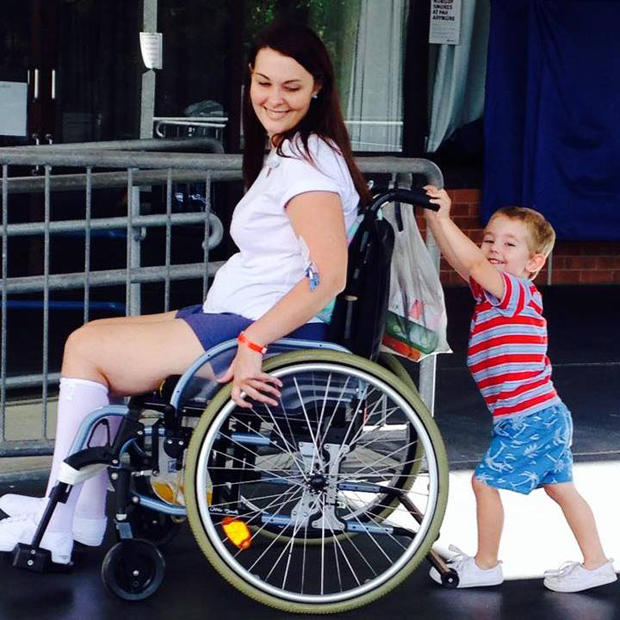 Jo Gilchrist, 27, was left paralyzed by a MRSA infection she contracted from a friend's makeup brush.
JO GILCHRIST/FACEBOOK

'The only thing we can put it down to is the makeup brush," she told the paper. "My friend did have a staph infection on her face and I was using her brush just before. I had no idea that could even happen, I used to share with my friends all the time."

The infection damaged her spine, and doctors said she might never walk again. But Gilchrist, 27, has been working to prove them wrong, getting back on her feet in physical therapy.

"It's been the hardest struggle I've ever faced," she wrote on Facebook. "There's been lots of sleepless nights and days spent sleeping. There's been vomiting, tremendous pain. Tears for the unknown and tears for all the accidents. As hard as it has been Im so lucky to have muscle power and no feeling than the other way around!"

Intensive treatment and therapy have helped. Gilchrist posted a short video of herself last week slowly moving her legs, standing and taking a few steps during physical therapy. "I have fought with everything I have to lead to this," she wrote.

Now doctors say her prognosis looks better. "Two weeks ago they said I might be able to walk for an hour or two a day -- like grocery shopping, washing up and hanging the washing out," Gilchrist told the Daily Mail. "I'm happy with that. I honestly didn't even expect that."

While her case sounds like a freak occurrence, health officials warn of the risks of spreading MRSA by sharing personal items like towels or razors that have touched infected skin. The U.S. Centers for Disease Control and Prevention says about a third of the population carries staph bacteria, usually without showing any symptoms, and about 2 percent of people are carriers for MRSA. The bug is often a source of outbreaks among hospital patients with weaker immune systems, but it can spread in the community as well.

Initial symptoms of a MRSA infection can include a red, swollen or painful skin inflammation and a fever; the sore spot may feel warm to the touch or develop pus. The CDC says anyone who experiences symptoms should wash and bandage the area and see a doctor. MRSA can be life-threatening if the infection spreads to the bloodstream or into the lungs, causing pneumonia.